How to disassemble a Dell 2005FPW monitor

First off, this is at your own risk. I'm not affiliated with Dell and figured this out on my own, with a little help from this guide. I don't think it's too difficult, but I see a chance for you to break the front faceplate since I was really surprised that I didn't. It's on very tightly, but it is possible to remove. With that said, here's how you can do it:
1. Unplug the power and DVI or GA cable from the monitor
2. Detach the monitor stand. To do this, place the monitor face down on a flat surface and press (and hold) the button on the back right in the middle. Lift up on the stand and it should come right out. The picture below shows the position of the button, with the stand pushed to the left 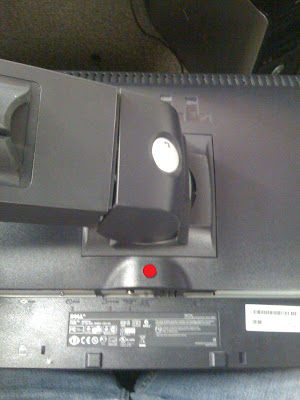 3. Remove the 4 screws that are now visible on the back, where the stand was attached 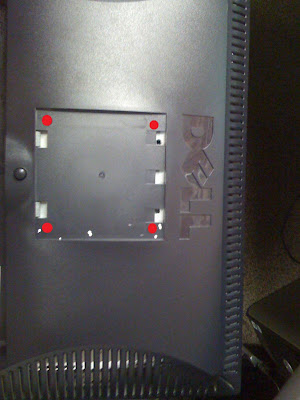 4. Flip the monitor onto its back
5. Now the tricky part. You need to pry the faceplate off the rest of the case. This was the most difficult part since the faceplate is on there pretty tightly. I put the monitor on my lap, and started at the bottom middle, placing my fingers on the inside while trying not to press on the screen too much. Be careful around the buttons, as there is a circuit board attached by a ribbon to the rest of the hardware If you look at the crack between the back of the case and the faceplate, you'll see a couple of slots. They're meant for a screwdriver or some other tool to help you pop the faceplate off. A combination of a tool and your fingers should make it easier for you to remove the faceplate without damaging it. 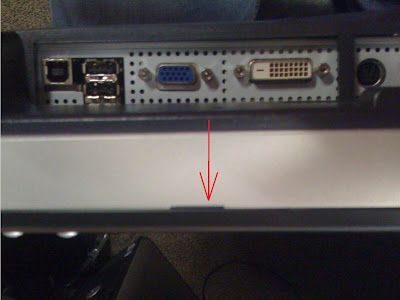 6. Ok, with the faceplate detached, now you need to get the circuit board off of the faceplate. I used a small straight screwdriver to pry up on it carefully. It's glued to the rubber buttons, but wasn't that difficult to get off. Once you have it detached, you can place the faceplate off to the side since you won't need it until you're ready to reassemble 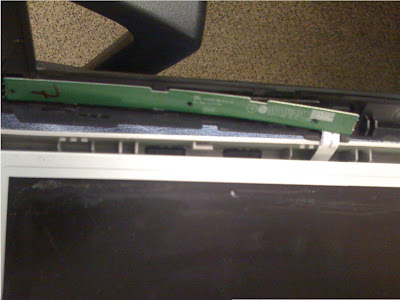 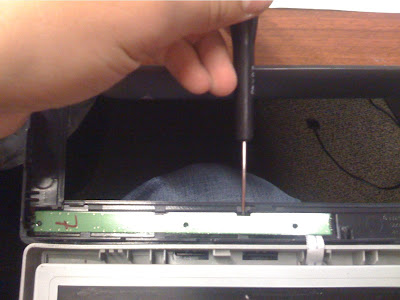 7. Flip the monitor face down again, being careful with the circuit board and ribbon from the faceplate, and also making sure the screen doesn't fall out. The screen should be easy to remove from the backplate since it's really just sitting in there at this point without any screws or glue. Once it is out, take the stand button and spring off so you don't lose them later on. They're on the back 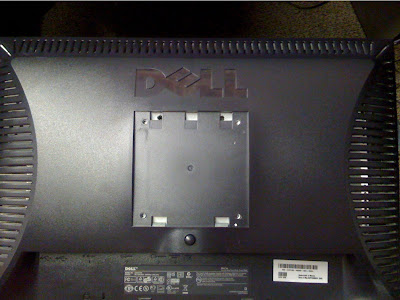 8. Remove the circuit board that is dangling now. To do so, just lift up on the brown flip clip that the ribbon cable is attached to. Once the clip is up, the ribbon cable should slide out easily 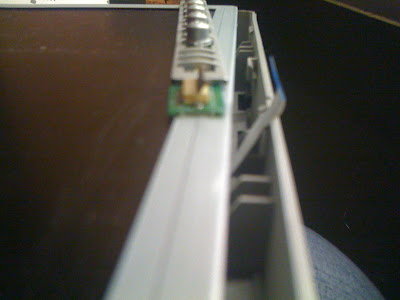 9. To remove the screen from the electronics, remove the four screws holding the screen to the cage you now have. There are two screws on each side. Be careful because there are also cables to disconnect before you can actually separate these two parts 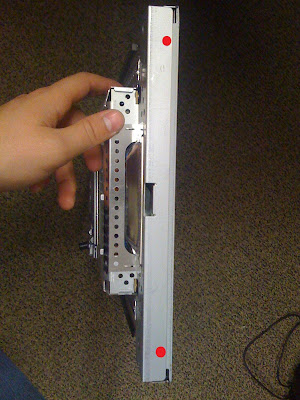 10. Remove the cables connecting the electronics cage from the screen. To do this, first remove the four cables attached on the right side (assuming it's facing down, with the top of the screen furthest from you). They are underneath the thin, aluminum cover that can be removed just by lifting it off. The cables can be pulled out, carefully of course. If needed, use a small straight screwdriver to nudge them along on the sides to start, but they aren't being held in place by any clips so no need to worry about that 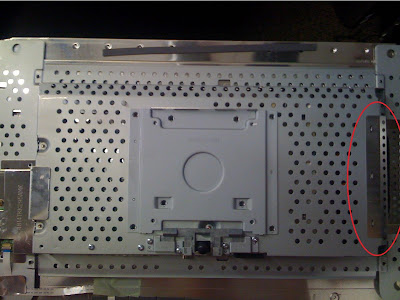 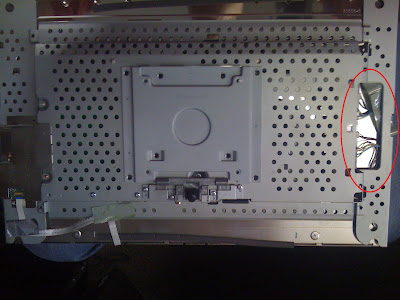 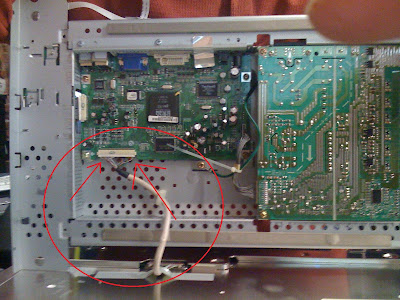 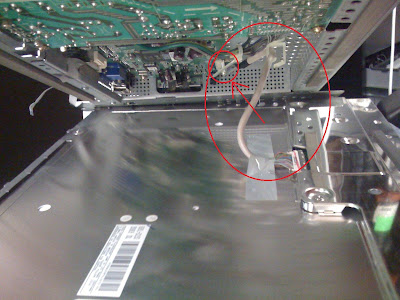 12. Now you have the cage, with the main board and power unit still attached. Time to remove the power unit. Remove the 4 screws in the corners, and also the two silver screws holding the actual power cord receptacle in place. Once those 6 screws are removed you can pull the power unit out, being careful as there are more cords attached underneath 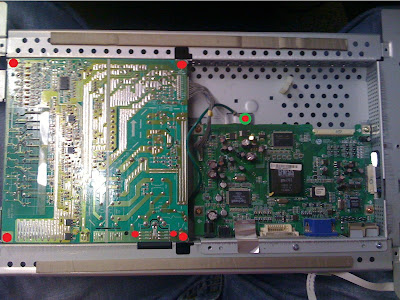 13. There is a ground cable, and another ribbon cable. The ground cable can just be unscrewed from the cage. The ribbon cable is attached with a clip. Using a small straight screwdriver, carefully lift up on the clip while gently pulling back on the cable on the side attached to the power unit. You may need to do this on each side until the clip has gotten behind the latch part, after which you can finish removing the cable. Place the power unit off to the side until you're ready to reassemble 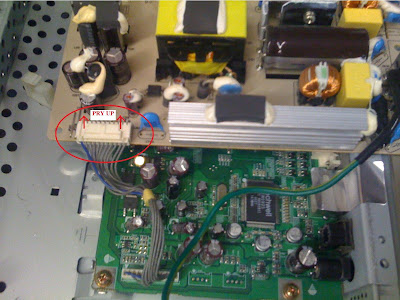 14. Now you just have the cage and the mainboard. There are four screws in the corners holding the mainboard in place, and a ribbon cable. There may also be two additional screws attached to the enclosure, and I've marked those two with a question mark. Unscrew the screws, gently remove the ribbon cable from the right side, then pull out the mainboard 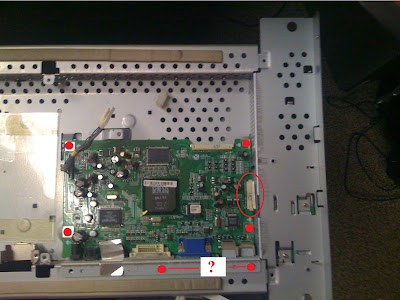 15. That's it, and you have a Dell 2005FPW fully disassembled.
The reason that I ended up doing this is because I had two Dell 2005FPW monitors "die" in the same month. One went into a kind of strobe mode, constantly flickering and making it unusable. The other seemed to have problems staying powered on. I took the two apart to try to make one working monitor, but didn't have any luck. Still, taking things apart can be fun anyway.
I also just found this post, which also gives some directions and was originally designed to tell you how to fix backlight bleed by just using some electrical tape around the edges of your screen. Check it out if you're interested. From the responses, it sounds like this is actually a pretty successful fix.

Thanks for this. Ive just taken my monitor to bits to remove blackflies and re-assembled it again. Monitor is like brand new again. Did wonder how to get behind the actual screen itself though. Good review!

I have quite a big scratch on the display (caused by an object that fell on the display from a wall support).
Risking too sound stupid.
Is this scratch directly on the display or does the faceplate contain some sort of plastic cover and this is the part that gets the scratches.
Also what can I do in this case to replace the damaged part ? (the scratch is too big to be fixed with screen polish solutions)

It'd be nice if the screen had some sort of protective film or cover, but unfortunately it does not. The scratch you have is most likely directly on the LCD panel itself. You could try searching Google for any part numbers you find on the monitor, but LCD panels are usually pretty expensive, and with the cost of new LCD monitors having gone down it may be better to just look at getting a brand new one. I don't know what type of quality you need, but something like a new 22" widescreen LCD monitor can be found and purchased for $125-$150 on the low end.

Thanks for the answer.

I was afraid this might be the case..but you know..hope dies last:)
I really really loved this monitor during its time with me.

Hello rslygh.
Thank you for this guide.

I want to open my Dell 2005FPW, because it smells like burning plastic. But it still works fine except for the USB Hub.

The problem is how do you get the faceplate off? Wich direction do you have to push?

Wow, sorry Danny. I didn't know there was a pending question. The faceplate comes straight out. It's a little tricky and you have to be careful so you don't break it, but you also have to use some force to pop it off. Once it's loose then you just need to remember that there are still cables connected to it that you'll need to disconnect before setting it aside.

Thanks for the info ! Now that I have it apart, I can safely say it's ready for the trash. It's really a pitty that a company like Dell couldn't engineer in a safeguard that would protect the unit from self destruction! i.e fuse or fuselink or something . Oh well , I'll just head up to my local office supply store and buy a new one . Their on sale this week for half the price of Dell . I will anticipate it lasting 5 years . I will never buy another Dell. I purchased it assuming better quality .

Do any of you want to sell the power supply board out of your trash unit? I have a unit with a defective power supply and cannot seem to fix it.

Thanks for the visual guide. I could not find this information anywhere else. It helped immensely.

Echoing the previous poster's comments, this was very clear, concise and steered me clear of several things that could have gone wrong before I even thought to do them! Thanks so much for turning what could have been a frustrating job into an easy step-by-step.

Thanks for the comment, and I'm glad it was helpful!

Thanks very much ! Just what I needed to fix the infamous C637 problem.

The whole screen of my 2005FWP flickered in any mode when powered-on while the monitor warmed up. It initially lasted a few seconds but after a month took 15 minutes to go away. Once it stopped flickering, the screen was normal until I powered it off for a short period of time. When I couldn’t stand it anymore I used this write-up to open the display and found 3 bad caps (bulged) on the power supply board. My board is a little different than the one shown. The bad caps were in a group (C210, C211, C212, C213, C301). I replaced them all and the monitor works great! Thanks for a great post. It made the disassembly easy.

You can try searching Google for references that you find on the screen, but LCD panels are generally quite expensive, and with the price of new LCD monitors have dropped, it may be best to just look into getting a new one.

I agree that you're probably better off purchasing a completely different monitor than trying to buy a replacement LCD screen for this one. This guide is strictly meant to help if you decide you want to attempt to repair what you have without purchasing anything.

Echoed the comments of the poster above, this was a very clear, concise and directed away from me many things that could go wrong before thought to do them. This is for turning what could be a frustrating job becomes easy, step by step.

Today I replaced many of the capacitors on my monitor's power supply board, and your page was extremely helpful, thanks!

hi, i just took apart my monitor because while plugged in the screen flickers. Does anyone know what causes this? please email me if you have any solutions or if i can just buy a part. thankyou:)

Thanks for this video. I fixed my 2005FPW by replacing the 470uf caps you pointed out. I used Panasonic FM caps, 35v.

Thanks, this helped a lot. I've got it apart without destroying it. No way I would've done that without your thoughtful description. I've got a similar situation as you. I've got two of these each with a different problem. I'm hoping mixing and matching some parts will give me a working one.

Thanks for taking the time to do this. I would not have gotten the bezel off intact without your help.

I had a flashing backlight issue, and recapping took care of it.